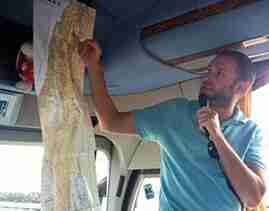 Nadav Kersh was born in Jerusalem and moved to South Africa at the age of 11. Seven years later, he returned home to Israel. He obtained a degree in Jewish Philosophy at the Hebrew University and through nonstop classes and study at the Israel School of Tourism and University of Haifa, he received his official license as a tour guide, with an expertise in Christianity and Islam.